If the global focus of 2020 was on containing the spread of Covid-19, 2021 has served as a reminder that, beyond the lockdown measures and other health-focused disruptions, there remains a broad range of terrorist threats and actors. These span from the local to the regional and transnational; from far-left and right of the political spectrum to the religiously-motivated.

Armed conflict has been a consistent and major driver of terrorism in the last year, primarily in the Middle East, Africa and Asia, in spite of the distraction posed by the global health crisis. In a similar vein, right-wing extremism across North America and Europe has continued to proliferate against the backdrop of the pandemic, supported by a growing body of conspiracy theories. Left-wing extremism in Europe has also remained on trend; although attacks are slightly down on recent years, they are likely to steadily rise again in the coming year.

These trends will almost certainly continue in 2022 as political and security vacuums persist alongside conflicts and sectarian fault lines. While terror-related incidents have declined sharply in the Middle East as conflicts become increasingly local in focus, mounting public frustrations with pandemic responses and socio-economic decline could lead to a resurgence in sole perpetrator attacks. Islamic State (IS) has already staged major suicide bombings in Iraq in recent months, demonstrating the group’s growth in capabilities amid high levels of instability.

In sub-Saharan Africa, jihadist insurgencies feeding on conflict and instability have expanded their attacks on local communities. IS and Al-Qaeda affiliates such as JNIM have successfully forced state withdrawal in rural areas in the Sahel, allowing them to boost recruitment and revenue streams, a highly disruptive strategy that will continue in 2022.

Moreover, the Taliban takeover in August will send shockwaves across the region and beyond. Afghanistan’s immediate neighbours, as well as governments further afield in Europe, the Middle East and Asia, will be wary of Al-Qaeda and IS affiliates using the country as a base to launch attacks overseas in 2022. This is of particular concern as Afghanistan already hosts between 8,000-10,000 foreign terrorist fighters, and the Taliban’s commitment to denying these groups operational space could quickly fade against other priorities.

The governments of India and Pakistan also fear terrorist groups such as Jaish-e-Muhammad and Tehrik-i-Taliban Pakistan expanding their influence and recruitment base following the Taliban’s victory. The risk of sole perpetrator attacks, already an established trend in a number of regions, may also increase in response to the perceived failings of Western governments to protect the Afghan population from Taliban rule and human rights abuses. 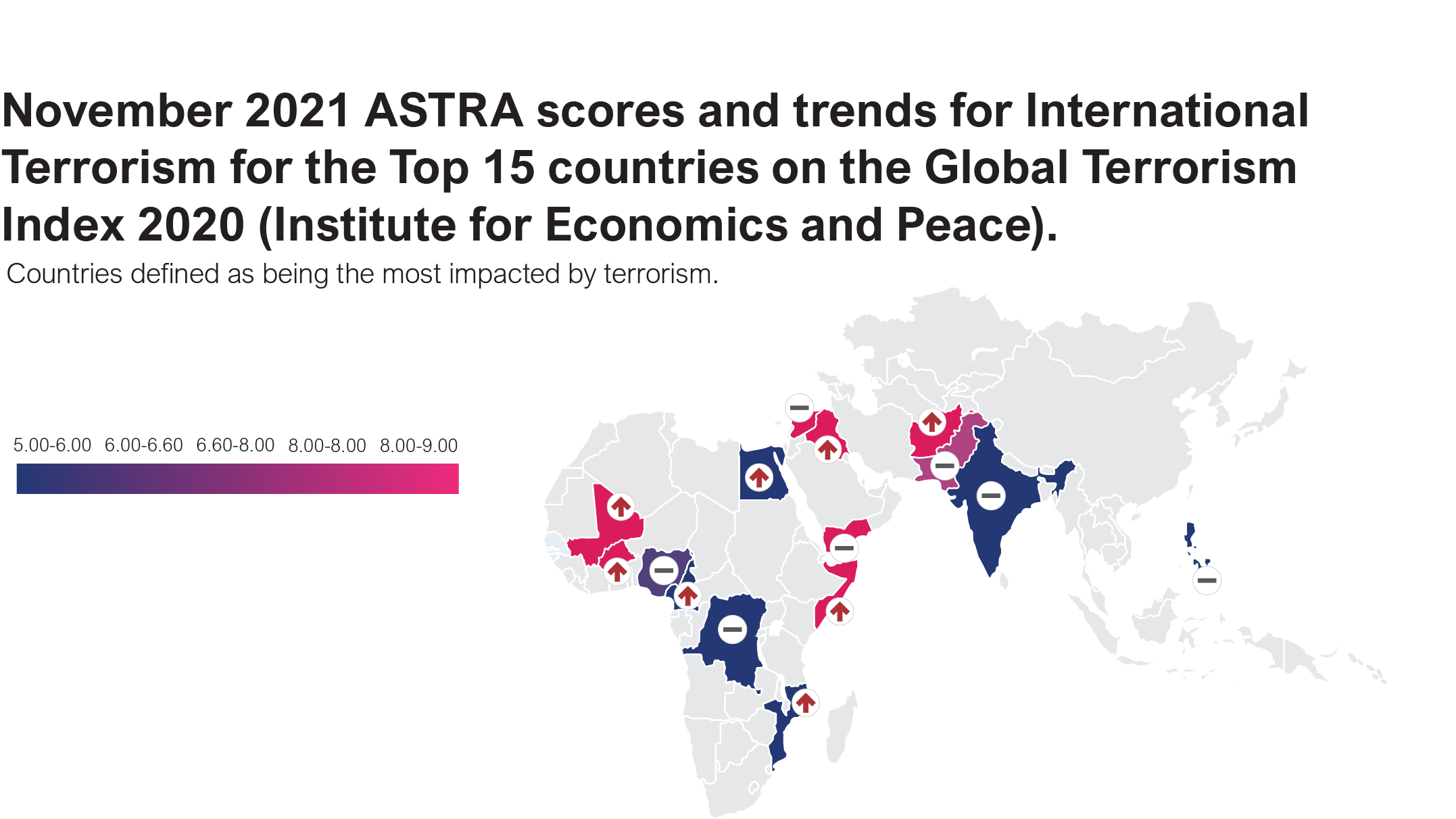 The Covid-19 pandemic has thus provided groups across the spectrum with opportunities to erode democratic values and polarise societies, in turn contributing to radicalisation. Notably, far-right activity quickly rose in the latter half of 2020 in reaction to government policies enforcing the ‘health pass’ and vaccination requirements across Europe and North America, a trend that will continue in the coming year as public health policy drives anti-government sentiment. In this regard, hard-liners on the fringes of anti-vaccine movements who increasingly align with far-right extremism may pose credible threats in the coming year.

Far-right extremism, now the greatest terror threat in the US, will also be compounded by the spill over of conflict zones and climate pressures that drive irregular migration. European governments in 2022 will also have to contend with rising xenophobia and anti-migrant narratives which bolster the ranks of right-wing extremist groups. Such hostility to refugees and migrants has already been witnessed in Turkey, and rocky Turkish relations with the European bloc over this very issue sustain the risk of another European migrant crisis in the coming year.

One of the key security challenges facing governments in 2022 will be the expansion of technology. Extremist actors will continue to enhance their use of advanced weapons technology, including 3-D weapons printing and unmanned aerial vehicles such as drones. 3-D printed weapons and drones are affordable and accessible, with the US and UK already reporting incidents using such technology. This issue will not be confined to the West however, with terrorist actors and armed groups in the Middle East and Asia also deploying drones to launch attacks in conflict zones.