On 7 July, President Jovenel Moïse was reportedly assassinated by a group of unidentified individuals in a targeted operation at his private residence around 0100 local time. The recently appointed Prime Minister Claude Joseph confirmed the assassination of the president and will now temporarily lead the Council of Ministers. Reports indicate that some of the perpetrators were speaking Spanish, with Joseph alleging foreign involvement.

A recent spike of violence in Port-Au-Prince caused by a realignment of the leading gangs triggered armed clashes in the streets, looting and attacks against security forces and humanitarian camps. In addition, President Moïse was allegedly linked to criminal leader Jimmy “Barbecue” Cherizier, who recently declared an uprising against both the wealthy and opposition leaders in the country.

The most relevant criminal groups in the country include:

The violent clashes in Port-Au-prince have trigged large population displacements, with the United Nations Office for the Coordination of Humanitarian Affairs (OCHA) estimating over there are now 17,000 internally displaced people (IDPs).

The assassination of President Jovenel Moïse is likely to see an increase in violent clashes in Port-Au-Prince, escalating physical threats to assets and staff in the country. In addition, foreigners have been recently targeted for kidnapping (KFR) and theft, including in humanitarian camps. The indications of Spanish-speaking perpetrators possibly could lead to increasing tensions with the Dominican Republic as the government seeks to regain control of the capital. Likewise, opportunistic criminals targeting foreigners will likely to exploit the situation, significantly increasing the already-high risk of common and violent crime.

From the strategic perspective, the event is likely to reduce security forces capabilities vis-à-vis organised crime groups and possibly could prompt a more robust response from the international community. 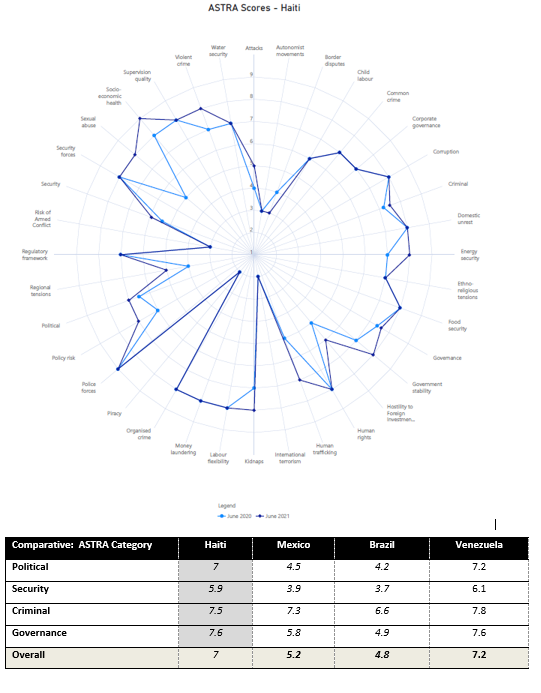