On 29 July, the UK Maritime Trade Operations (UKMTO) circulated a warning that a “non-piracy” incident had occurred approximately 86 nautical miles from Al Duqm port in Oman. The Mercer Street Vessel, a Japanese-owned oil tanker managed by Israeli-owned Zodiac Maritime, was attacked by suicide drones that killed a Briton and Romanian onboard. Whilst initial reports did not indicate a clear perpetrator, British Foreign Secretary Dominic Raab and US Secretary of State Anthony Blinken declared that both nations had sufficient intelligence to suggest that Iranian drones were responsible for the attack. Israel has also stated its intelligence services have proof of Iranian involvement in the attack. Britain, Romania and Liberia have formalised their allegations in a letter to the United Nations Security Council, adding that Iranian involvement is “highly likely”, and that a multilateral response to the violation of international law is required. The European Commission's Spokesperson for Foreign Affairs and Security Policy, Nabila Massrali, has called for a full investigation into the circumstances of the Mercer Street attack, stopping short of a direct condemnation of Iran's alleged involvement in the attack.

In tandem, three different maritime security forces have also suggested that Iranian-backed forces were responsible for the “potential hijack” of Panama-flagged asphalt tanker, Asphalt Princess, which occurred on 3 August near Fujairah off the coast of the UAE, only days after the Mercer Street attack. Tehran has vehemently denied any involvement in both incidents and has branded the accusations made by Western allies and Israel as an attempt to damage Iranian reputation in the region. 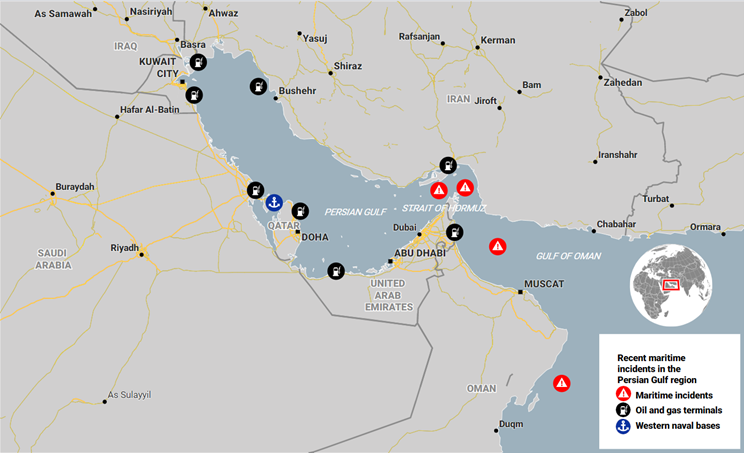 Iran and Israel have long been engaged in a “shadow war” characterised by tit-for-tat maritime attacks, cyber assaults and low-level attacks on critical infrastructure. However, the recent Mercer Street vessel attack represents an alarming escalation in tensions. Israel and Iran’s newly appointed hardliner leaders have signalled harsher responses to foreign policy, as Israeli Prime Minister Naftali Bennett indicated that Israel will be able to “act alone”, whilst President Raisi’s foreign minister warned that Iran will “respond promptly” to any security threat. The latest attack therefore represents a possible turning point in what has long been considered a game of brinkmanship in the “grey zone”, to blatant acts of aggression and hostility.

Nevertheless, the recent acceleration in attacks near the Gulf of Oman is also a serious cause for concern to regional players including Saudi Arabia and the UAE, who have notoriously been targets for Iran’s proxy activity. Despite promising talks between Iran and Saudi officials in April, state-owned Saudi Aramco has been the target of both physical and cyber attacks, in relation to escalating Saudi-Iran-US relations parallel to the ongoing Saudi-led intervention in Yemen. In addition, the ongoing normalisation of ties between UAE-Israel with the renewal of the Abraham Accords underpins Iran’s increased hostility towards the Emirates recalling the seizure of a UAE-registered ship and crew in August 2020 for which Iran claimed responsibility.

Nevertheless, the rare involvement of Western allies and the US in the aftermath of the Mercer Vessel attack provides an example of how Israel may seek to capitalise on flared US-Iranian relations in efforts to block the renewal of the 2015 nuclear deal. Israel has been openly critical of US President Joe Biden’s intentions to renew the Joint Comprehensive Plan of Action (JCPOA), as it threatens to throw Israel’s national security policy based on deterrence off balance. Therefore, the escalation of Iranian tensions may be a welcomed compromise for Israel if this results in the prolonged de-railing of nuclear talks, but will threaten international security in the event that Iran remains a nuclear power.

Ultimately, whilst low-level attacks in the Gulf of Oman and the Strait of Hormuz have become increasingly common over the past few years, the further escalation of deadly attacks similar to the Mercer Vessel strike risks severely disrupting oil supplies and transport operations in the Persian Gulf, where a fifth of the world’s oil transits. The region is still reeling from the negative consequences of pandemic-related movement restrictions, therefore oil investors warn that the economic impact of additional disruptions will be particularly hard-felt.

Multilateral response from UK, US and potentially NATO members likely in coming weeks

The UK's response to date has been characterised by a swift condemnation of the attack on the Mercer Street, as well as a warning from the UK's military chief General Sir Nick Carter that Iran's 'reckless behaviour' must be contained, highlighting the importance of improving deterrence in the region to avoid a more serious escalation in hostilities. As such, both the UK and US are likely to increase physical security presence in the region, increasing the resilience of international shipping lanes to hostile state behaviour or non-state actor threats. At the time of writing, UK special forces are understood to have been deployed to the region following the Mercer Street incident, and are likely to remain in the aftermath of the Asphalt Princess event.

Involvement from other NATO members in the multilateral response is expected to hinge upon the findings of an international investigation into the Mercer Street incident, understood to currently be underway. Should Iranian involvement be concretely proven, as is presently expected, other NATO members – particularly Romania – may commit to supporting physical deterrence options in the region.

The political reaction from the US and UK toward the 'potential hijack' of the Asphalt Princess in the Gulf of Oman has been more moderate, as it presently remains unclear what transpired in the incident. A spokesperson for the US State Department noted that it remains 'too early to offer judgment', and the UK's Royal Navy has simply confirmed that the armed individuals who boarded the Asphalt Princess have left the tanker. However, the incident is nonetheless expected to fuel regional tensions between the UK, US and other NATO member states and Iran, despite the latter's denial of any involvement in the incident.

In the short term, a multilateral response from the US, UK and Israel related to the Mercer Street incident is expected, given both Secretary of State Blinken and Foreign Secretary Raab's comments that a 'collective response' will be forthcoming. Although the form of this response will not be confirmed until the international investigation into the Mercer Street incident is concluded, increased UK and US military presence along shipping lanes in the Arabian Sea is expected. Firms operating in the Gulf of Oman and wider Arabian Sea will therefore face heightened risk of disruption, and may face the risk of further incidents developing as regional tensions escalate.

Commercial shipping lanes in the region and beyond the Strait of Hormuz will remain vulnerable to low-level attacks, however the escalation of tensions between Iran and Israel will continue to pose enhanced safety concerns to personnel and staff onboard vessels. Disruptions to oil supplies and commercial shipping operations are elevated and will stunt regional economic recovery.

Ultimately, the trajectory of diplomatic relations between Israel and Iran is likely to worsen in light of the recent attacks, with tensions likely to increase regional instabilities where both sides hold proxies. Finally, Tehran’s likely involvement places considerable strain on the development of nuclear talks with Western allies, and complicates President Raisi’s commitment to lifting the US sanctions that are crippling Iran’s economy.