Despite Iran’s religious ideology and doctrine clashing starkly with that of the Taliban, an isolated Taliban will likely be a prime candidate for Iran to do business with while Tehran remains under strict US sanctions. Notably, in the last year or so, Iran has successfully increased its oil exports to Asian states despite the threat of economic and diplomatic repercussions with the US. Iran’s recent resumption of fuel exports with Afghanistan is in line with this trend. It is also indicative of Tehran’s wider strategic shift towards trading with the East, and explicitly away from the West. For instance, the Iran-China 25-year Cooperation Program signed in March includes an assurance of USD 400 billion worth of Chinese investment in the Iranian economy in exchange for discounted oil supplies.

In this regard, should Iran feel diplomatically and economically emboldened by the apparently growing acceptance in Asia of trade with Tehran, the US and the signatories of the 2015 Joint Comprehensive Plan of Action could lose considerable leverage in seeking to bring Iran back under the terms of the nuclear deal. This, combined with the emergence of a more hardline leadership in Iran that continues to pursue nuclear developments towards weapons acquisition, could derail current nuclear talks altogether. Saudi Arabia will also be particularly wary of Iran’s tentative financial gains from increasing oil exports, as another regional partnership in this case with the Taliban may translate into greater economic support for regional proxies, risking a rise in sporadic violent attacks within militia strongholds and maritime spheres.

Not only will Iran’s shift eastwards complicate US efforts to rein in Tehran’s hostile activities, but it could also bring Iran into greater economic competition with Saudi Arabia regarding diplomatic and trade opportunities with South Asian countries. Notably, Riyadh seeks to reduce its dependency on oil exports, though revenue from oil exports will remain key in the coming year or so, with Asian countries as some of the leading buyers. This includes the potential renewal of a bilateral trade agreement with Bangladesh (formerly worth up to USD 1.1 billion in 2019), as well as up to 11 other free trade agreements with nations including India, Indonesia and the Philippines. How these countries deal with the Taliban could quickly become a source of tension.

Moreover, Pakistan’s continued support for the Taliban will likely harm Pakistani-Saudi relations, which could work in Iran’s favour to try to isolate Riyadh from one of its major allies. Strained Sauid relations with Pakistan will increase Tehran’s geopolitical clout in the region, particularly considering Iran’s interest in the Gwadar Port in Pakistan.

The Gulf Cooperation Council states (GCC), chiefly Saudi Arabia and the UAE, have adopted a pragmatic response towards the Taliban takeover. This stems from a desire to prevent Afghanistan from becoming a breeding ground for extremism resulting in spill-over attacks. Riyadh and Abu Dhabi have therefore called for stability and security in the country in their messaging thus far. Similarly, other leaders have sought to leverage religious clout to endorse a moderate version of Sharia law, without explicitly commenting on Taliban rule. This includes Oman’s Grand Mufti Ahmed Al-Khalili, who hailed the American extraction as a victory but was careful to avoid explicitly voicing support for militant forces. This represents a balancing act by Gulf states who likely hope to contain Taliban forces as a means of safeguarding their own national security.

Saudi Arabia and the UAE have therefore expressed concern over a renewed threat of domestic attacks motivated by Islamist militants affiliated with al-Qaeda and Islamic State (IS), who will probably feel emboldened by the US withdrawal from Afghanistan and subsequent military vacuum. Historically, key cities including Jeddah and Riyadh have been major targets of terrorist attacks which coincided with instances of evelated regional instability, including the Iraq war (2003 – 2011) and IS insurgency in Iraq and Syria (2014 - 2017). Subsequently, Saudi Arabia and the UAE’s crackdown on Islamist extremism and the arrest of suspected militants could come to the fore once again over concerns that a new Taliban rule will disrupt internal security dynamics.

In addition, despite the recent thawing of relations with GCC states, namely the UAE, Qatar’s position as the regional power broker with the Taliban threatens to flare tensions in the event of a serious breakdown of regional security. Qatar’s Foreign Minister Sheikh Mohammed bin Abdulrahman al-Thani has already warned international states of the dangers in isolating Afghanistan, whilst appealing to Taliban leaders to accept foreign security officers at Kabul airport.

Though Qatar’s position allows Doha to reinforce its status as a regional mediator with international powers including the US, it risks another breakdown in relations with the UAE and Saudi Arabia on the grounds of Qatari support for and harbouring of Islamist terrorists. In turn, this could lead to the re-implementation of the years-long GCC blockade on Qatar that was only lifted in January this year. This would inevitably impact the fluidity of business operations and economic growth, as surrounding GCC states will not hesitate to prolong the embargo over the central ideology dispute of Qatar’s perceived support for Islamist extremists.

The ongoing withdrawal of US and allied troops from the wider region has been perceived by certain neighbouring states as an act of abandonment in the face of growing instability and shifting power dynamics. For instance, a few Saudi officials have openly criticised the US withdrawal from Afghanistan, including  former intelligence chief, Prince Turki al-Faisal, who warned of US weapons ending up in al-Qaeda’s hands. In addition, Prince Talal Al Faisal, a junior Saudi royal, concluded that America’s recent actions signal that the “US can never be trusted”. As these statements suggest, Gulf states such as Saudi Arabia that have relied on substantial US support to maintain internal security may feel like they have no other option but to co-exist with the Taliban or bolster other alliances as the latest US step back from the region confirms Saudi fears of the mounting trend of US drift.

The deepening mistrust in the US as a security guarantor, particularly after former US president Donald Trump failed to secure re-election having enjoyed particularly close relations with Riyadh, has also resulted in an accelerated shift in Saudi cooperation with other major actors. Notably, Saudi deputy Defence Minister Prince Khalid bin Salman signed an agreement on 24 August to boost military and defence cooperation with Russia, which strives to exert more influence over the Middle East. This likely indicates Saudi strategy to forge an increasingly independent foreign policy of the US, a longer-term trend which is likely to negatively impact policy in certain areas. For instance, it could harm Western access to ports in the region, particularly given US eagerness to avoid economic activities in locations with Chinese investments. 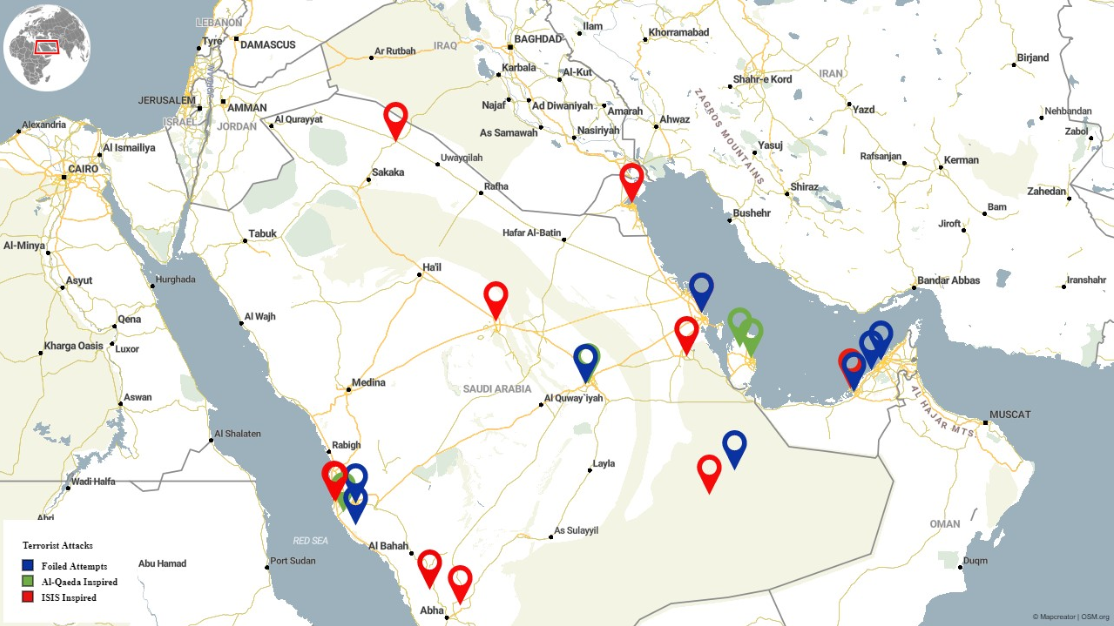 Neighbouring states in the Gulf region are likely still trying to determine their own policy in response to the rapid and chaotic withdrawal of US forces from Afghanistan. Crucially, the Taliban takeover will compound existing security and diplomatic issues stemming from Iranian hostilities and shifting dyanmics in the GCC.

Firstly, Iran is likely to try to use the US withdrawal to its advantage to gain another trade partner in the region. Notably, cooperation with the Taliban could ease the severe economic pressure from US sanctions and lead to a more hardline stance from Tehran in nuclear talks, in light of its newfound geopolitical leverage. This will not only de-stabilise Saudi-Iranian relations and exacerbate proxy attacks further afield, but will threaten to derail the renewal of the 2015 nuclear deal against a backdrop of ongoing nuclear advancements. In a similar vein, given the Gulf states’ elevated concerns over internal security dynamics and lingering threat from Islamist extremists, Qatar’s perceived cooperation with the Taliban could reinforce the ideological differences and foreign policy clashes that led to the imposition of the GCC blockade in mid-2017.

Separately, Saudi Arabia’s gradual shift away from US-dominated defence and foreign policies will continue as feelings of US abandonment deepen. Saudi-US relations risk further deterioration if President Joe Biden follows through with his withdrawal of combat operations in Iraq at the end of this year, potentially exposing another security vacuum on Saudi Arabia’s border for extremist groups and Iran-backed proxies to exploit.

Overall, the Taliban takeover adds another layer to already complex and shifting regional dynamics in the wider region. Not only are these shifts likely to impact the ways in which states across the Gulf and Asia interact and trade with one another, creating some uncertainty for businesses, but recent developments will also fuel concerns over the potential for renewed attacks from extremist actors. In the Gulf, a strong security posture will likely mitigate this risk in part, but an increase in Islamist extremist activity over the coming months would negatively impact investor confidence and could impact operations. This could also lead to tougher measures at vulnerable borders which could disrupt supply chains as security postures are enhanced.