Tensions between Beijing and Taipei have been a feature of President Tsai Ing-wen's last five years in office. In recent weeks, the relationship has deteriorated further as administrations on both sides celebrated important political events.

Over four days in early October, the Chinese air force deployed a record number of warplanes (around 150 sorties) into Taiwan's Air Defence Identification Zone (ADIZ) (see Sibylline Alert - China-Taiwan - 5 October 2021). This came during China's week-long holiday marking the anniversary of the founding of the People's Republic of China (PRC) on 1 October. The timing with the national day celebrations is poignant, as the Chinese Communist Party's (CCP) victory over the nationalist Kuomintang (KMT) in the civil war resulted in the PRC proclamation in 1949 and led Taiwan to become a separate political entity from the mainland. However, Beijing regards Taiwan as a breakaway province and seeks to achieve an eventual unification.

The sorties also occurred ahead of Taiwan's own national day on 10 October – the 110th anniversary of foundation of Republic of China (ROC). Although this anniversary is also commemorated in China, Beijing tends to focus on the 1911 Revolution that led to China's transition from a dynastic empire to a republic state. In a speech at an event marking the anniversary, Chinese President Xi Jinping reaffirmed that reunification with Taiwan "must be fulfilled", preferably under the "one China, two systems" principle. In her own national day speech, Taiwanese President Tsai rejected such a proposal, insisting that the island and mainland should not be "subordinate to each other" and that Taiwan must "resist annexation or encroachment upon its sovereignty”. Last week, Taiwan's defence minister suggested that cross-strait tensions have deteriorated to the worst point in 40 years. There are broad factors driving this sentiment, notably the growing animosities between China and the US. The Chinese air force's activity in Taiwan's ADIZ took place around the same time of a six-nation naval exercise conducted by the US and its allies, including Japan and the UK, off Okinawa – one of the largest naval drills in western Pacific in decades. 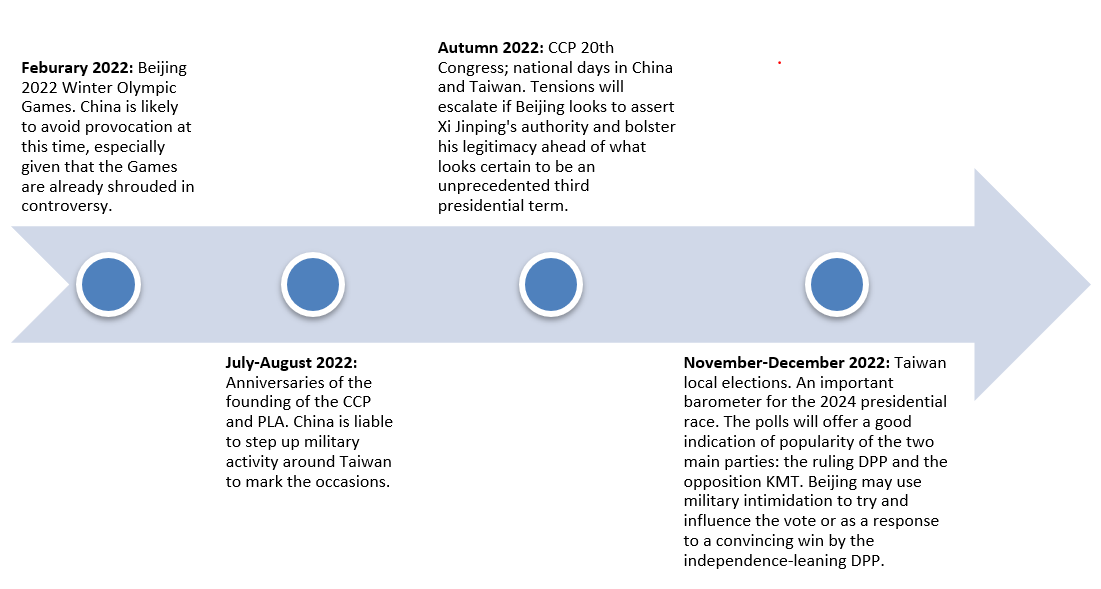 Beijing’s sensitivity to private sector attitudes on Taiwan is increasing

President Tsai Ing-wen's hard-line stance on Beijing, in defence of Taiwan's sovereignty and democratic values, is popular with the Taiwanese electorate. On the other hand, her rejection of the ‘One Country’ consensus means that Beijing will continue to exert pressure on the self-governing territory strategically, diplomatically and economically, which undermines the business environment. Nonetheless, it is doubtful that China will seek to take Taiwan by force in the medium term due to the prohibitively high costs and potential for US military intervention. Tsai is focused on keeping it that way, as shown by her stance to maintain the status quo and not seek formal independence.

Beijing’s continued military posturing derives from its refusal to rule out unification by force. However, a major armed confrontation is unlikely, as Beijing does not possess a significant enough strategic advantage to guarantee a swift and successful military offensive. Taiwan is a well-defended island, particularly as the US is committed to preserving the status quo across the strait. Instead, Beijing will continue its current strategy in response to what it perceives as unfavourable developments regarding Taiwan. This will include naval or air force drills in response to Western strategic initiatives in the region, such as Washington's political and military engagements with Taipei (including unofficial visits or arms sales to Taiwan).

Military drills are unlikely to have a direct impact on most businesses in the region. However, Beijing is increasingly sensitive to any action or image that may be perceived to be supportive of Taiwan's independence. This includes recognition of Taiwan as an independent state, either accidently or intentionally, in official company communications, websites, or any related product/service in the public view. To this end, authorities in China may use politicised regulatory oversight, which could result in a temporary suspension of business operations or a revocation of contracts, to punish companies that fail to comply with the ‘One China’ principle – a political red line for the Chinese government. Fines are also a potential penalty, for which there is precedent.

Western firms are also likely to face increasing pressure to take a public stance on Beijing’s perceived assertive and belligerent behaviour towards Taiwan. Those companies that take a firm position against Beijing, however, risk encountering a strong backlash from their Chinese suppliers, business partners and customers.

For the next 12 months, there is little prospect of a marked improvement in the relations between Taiwan and China. The sovereignty of Taiwan is a non-negotiable baseline for Beijing to conduct international affairs. For Beijing, the 'One China' principle is not only the foundation for its relations with Taiwan, but it also connects to the core of the Chinese Communist Party's political legitimacy in the aforementioned historic context of the People's Republic of China. As a result, Beijing will not soften its stance on Taiwan, regardless of any pressure from the international community. Similarly, President Tsai Ing-wen and her Democratic Progressive Party (DPP) maintain that Taiwan is already an independent state and firmly reject the 'One China' consensus that the opposition KMT agreed with Beijing in 1992.

Despite the low chance of conflict, a naval stand-off would increase the risk of trade disruption

As the Chinese air force's incursion coinciding with US-led naval exercises illustrated, the increased activity from the PLA has been met with a greater frequency of US naval patrols in the proximity of the Taiwan Strait, as well as with heightened alertness from the Taiwanese defence infrastructure. This pattern raises the risk of a tense military stand-off between China and the US or Taiwan. Even with a low chance of physical confrontation, this scenario could lead to disruption for businesses operating in transport and logistics across the Taiwan Strait.

As Beijing deploys more naval and air assets to the strait, Taipei is already planning to increase defence spending. Meanwhile, Washington continues to engage its strategic focus on the region. This means that military drills by all sides are likely to become more frequent and closer to each other in the coming months. Any miscommunication or miscalculation would therefore result a significant escalation in international waters.

The diplomatic exchanges required to de-escalate a military stand-off would encounter difficulties, especially given the already high levels of mistrust. There is also the potential for economic measures, with knock-on delays to the customs process. Indeed, Beijing has already shown a willingness to impose trade restrictions in its economic coercion against Taipei.

In the event of a military stand-off, Chinese authorities are unlikely to force international firms to cease operating. However, staff or companies from countries perceived as supporting Taiwan would face an increased risk of licence or visa revocation or suspension. Chinese businesses and the public could also push to boycott Taiwanese firms that maintain strong ties with Washington.

A naval blockade in or around the Taiwan Strait is a worst-case scenario that would cut off all trading routes between Taiwan and China. A full armed conflict would still be unlikely in this case; however, given the heavy deployment of military assets in the region, it is plausible that a minor confrontation would result in limited casualties. Both sides would almost certainly deny liability for the incident and press for compensation for any casualties suffered, causing further damage to cross-strait relations. However, both sides would also work quickly to prevent further military escalation.

The logistical disruption caused by a naval blockade would likely have an impact on factory operations and increase costs for companies on both shores of the strait. For example, firms may be forced to seek alternative sources of parts and components, paying a premium price in some cases. The risk is highest for large Taiwanese firms with established manufacturing sites and market presence in China.

A naval blockage would also increase fears of a military conflict between the US and China, causing overall business confidence to decrease in the region. This would see international firms seeking to re-locate from the Greater China region, while inward investment into China and Taiwan and their respective capital markets would fall sharply in the event of low-intensity conflict. As such, diplomatic efforts are highly likely to remain a priority in order to avoid this eventuality.