A map showing central Glasgow and likely areas of disruption and points of interest during the summit. To access the fully interactive map that details numerous activist threats across Glasgow and the wider UK, click here.

The timeline below highlights key events to note in the lead-up to and during COP26. However, this timeline should not be considered comprehensive as activist groups have not announced the majority of their actions and protests in order to minimise the chances of police and security shutting them down. 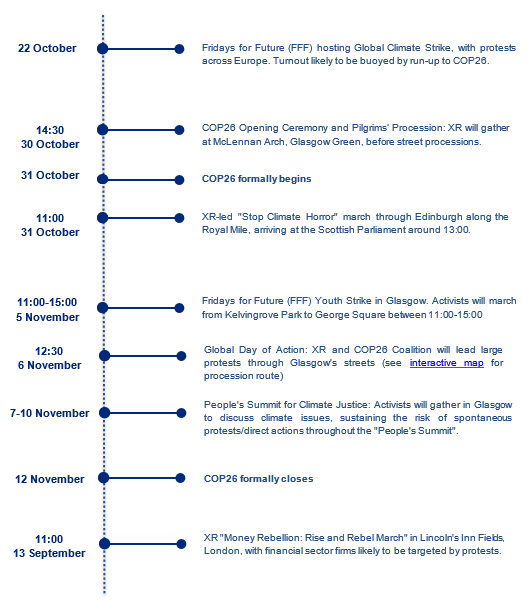 Following Scottish parliamentary elections in May 2021, the ruling social democratic Scottish National Party (SNP) won its fourth consecutive term. While the party retains significant support, mitigating the risks to government stability in the near term, the SNP lost its majority in the election, forcing it enter into a cooperation agreement with the Scottish Green Party, which will likely heighten policy risks to carbon-intensive industries.

Scottish independence continues to dominate the domestic political agenda and thus is an enduring source of policy risk and political tension in Scotland, as the issue continues to strain relations between Holyrood and Westminster. However, it is highly unlikely to have any substantial impact on the domestic political and security situation in Scotland in the short term. Relations between the UK Conservative government of Boris Johnson and Nicola Sturgeon's SNP are volatile, with the former's refusal to grant another referendum on independence souring relations in particular. Most recently, dissatisfaction with London increased in Scotland following a hike in National Insurance tax and cuts to universal credit, feeding anti-government sentiment which sustains the risk of protests in major Scottish cities, including Glasgow.

The issue of stationing the United Kingdom's nuclear weapons in Scotland also remains a significant source of friction as the SNP strongly supports nuclear disarmament and opposes the stationing of British nuclear weapons in Scotland. The Scottish government's stance feeds into wider anti-war sentiment in Scotland, where activists are increasingly targeting various sectors thought to be affiliated with or investing in the defence industry.

Sectarian tensions between Protestants and Catholics and Unionists and pro-independence groups have been historically high in Scotland, particularly in Glasgow. Frequent large-scale demonstrations, parades and processions take place, usually attracting 5,000-15,000 people. Such demonstrations often turn violent, requiring continued and enhanced police presence. However, it is unlikely that such parades would be approved during COP26 as they would severely disrupt travel and public transportation in the city.

Climate, anti-war and independence related activists are also particularly active in Scotland, with demonstrations taking place across Glasgow frequently. Robust police presence in the city during COP26 will likely mitigate the scale of disruption caused by large-scale demonstrations, though sporadic incidents and stunts are expected to occur throughout the week of the conference.

The national Terrorism Threat Level in the United Kingdom is "Substantial", meaning that attacks are likely, but the threat of extremism and terrorism is generally lower in Scotland, including in Glasgow, in comparison to other areas of the UK, most notably London. Nevertheless, the presence of politicians and delegates at such a high-profile world summit will likely remain a tempting target for extremist actors. While this underlines the enduring risk of an attack, robust counter-terrorism capabilities and police presence will likely mitigate the risk of a successful attack to a significant extent. Common and organised crime remain higher in Scotland than in the United Kingdom in general, however, with drug use and gang violence a particular issue in Glasgow.

COP26 retains a singular importance to environmentalist groups across Europe, with Extinction Rebellion (XR), Fridays for Future (FFF) and Greenpeace all seeing it as a make-or-break summit of existential significance. XR promotional material on COP26 is nevertheless already anticipating the failure of the event, with general pessimism towards the process likely to fuel activist activity. As a result, significant turnout and disruptive activity is expected across Glasgow and the wider UK for the duration of the summit.

Activist tactics are likely to remain non-violent, with protesting, blockades, "die-ins", and general civil disobedience the most likely forms of disruption. However, traditional road blockades and occupations will likely cause the most general disruption to Glasgow during the summit. Large groups and individual activists alike will sit on major roads and intersections, with the use of large objects, including boats or cars, also likely to be used to block traffic. While strong police presences will likely prevent some protests from successfully materialising, the use of "lock-on" devices and glue could prolong disruption as police try to safely remove activists, which often takes hours. The specific tactics of these groups and their likely tactical impact are assessed in detail throughout this report, including targeted direct action.

General protesting and mass marches will furthermore remain key causes of knock-on disruption to road traffic across the city. The Global Day of Action protest on 6 November will see the largest activist turnout and likely prove the most disruptive march during COP26. Activists will gather in Kelvingrove Park at 12:30 (local time) before marching through the city centre, stopping at George Square, before ending in front of the People's Palace on Glasgow Green. For the full procession route, see the interactive map.

Ultimately, however, the COP26 summit itself will likely determine the trajectory of environmental activism in 2022 and beyond, with the potential failure - or perceived failure - of the summit likely to prove a major trigger point for activist escalation. If global leaders fail to reach a consensus on combatting climate change at the summit, environmentalist groups are likely to re-evaluate their tactics and could push for more radical options.

If the summit is perceived to have failed, the decentralised nature of groups like XR will mean there will be an elevated risk of radical elements on the fringes of the organisation escalating beyond established civil disobedience tactics. We have already seen mainstream XR members use hammers to smash windows of London banks earlier this year, and so precedents already exist to indicate potential for more destructive direct actions in the future. As a result, growing activist exasperation at government and corporate failures to act will carry with it an increased risk of radicalisation, though if COP26 results in an ambitious climate strategy this risk will be significantly mitigated. Ultimately, however, many activists will consider any outcome of COP26 as not going far enough, thus sustaining the risk of escalation beyond the summit.

Numerous delegations, organisations and sectors will remain at particular risk of environmentalist activism for the duration of COP26. Oil and gas, heavy industry and the financial sector will naturally remain the most prominent targets of groups like XR and Greenpeace, but the high-profile nature of the event will mean high activist turnout in Glasgow will sustain the risk of a larger range of sectors being directly or indirectly impacted by activist activity.