Since the 2008 Russo-Georgian War, the Black Sea region has been amongst the most active arenas for geopolitical competition and armed confrontation. Russian involvement in frozen conflicts in Abkhazia, South Ossetia, Transnistria and in active conflict in Donbas and Crimea have been met by increased NATO presence and engagement with the region. With Russia-West relations at post-Cold War lows, this trend is unlikely to abate in the coming years, with intensifying arms races and geopolitical competition ensuring the Black Sea region will remain one of the most active arenas for confrontation.

The recent tour of US Secretary of Defence Lloyd Austin to numerous Black Sea littoral states in October exemplified this intensifying competition, with Russian Sukhoi Su-30 fighter jets scrambling two US B-1B strategic bombers during Austin's visit to Kyiv. The tour came ahead of the official suspension of Russia's Permanent Mission to NATO on 1 November, a move that effectively severs what little diplomatic contact existed between Moscow and the alliance. Similarly, Russia launched military exercises from 2 November in response to the deployment of the USS Mount Whitney command ship to the Black Sea the day before.

These incidents further raise the possibility of inadvertent escalation during periods of heightened tensions. Looking ahead to 2022, numerous flashpoints are likely to sustain the risk of an escalation amid these heightened tensions, escalations which could impact not only littoral states but also international commerce. 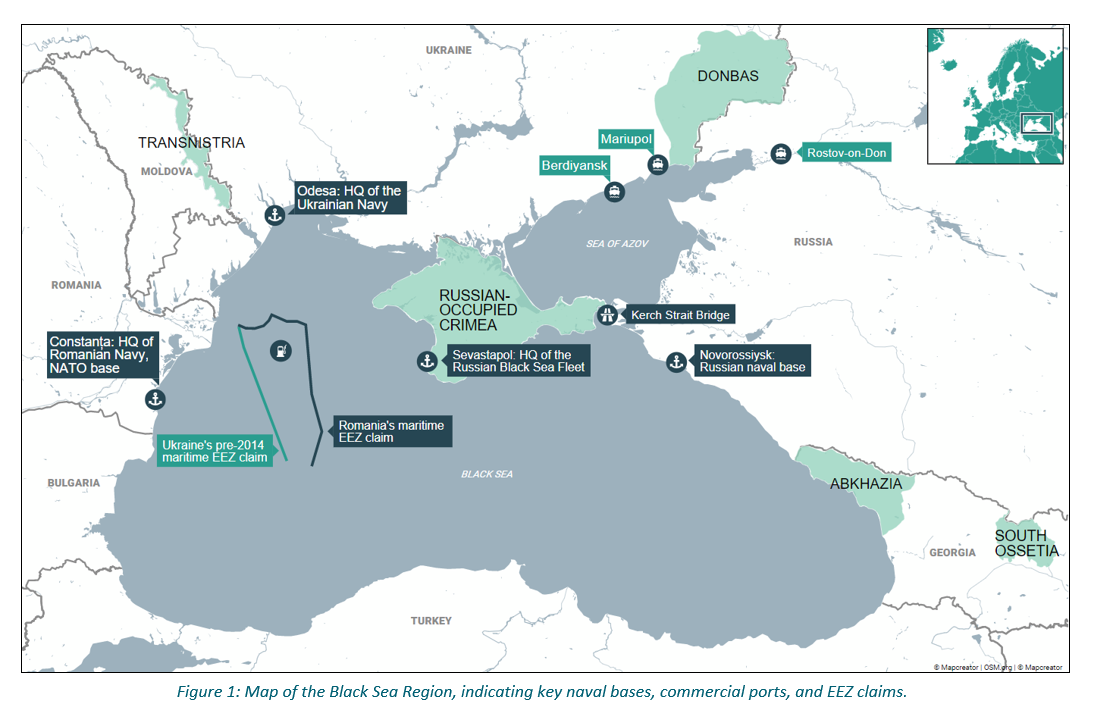 Since the 2014 annexation of Crimea, Russia has steadily increased its presence and naval capabilities in the Black Sea region. Leveraging its newly consolidated presence in Crimea, Moscow has boosted its ability to conduct military coercion, power projection and cause disruption of international trade routes in the Black Sea and the Sea of Azov, hindering not only Ukrainian trade but international shipping as well. Russia's de-facto control over the Sea of Azov furthermore places a heavy economic burden on Ukraine as the country's economy is heavily reliant on transport through the Sea of Azov and the port of Mariupol. Between 2014 and 2016, the country's exports halved while Kyiv also lost control of 80% of its offshore petroleum reserves 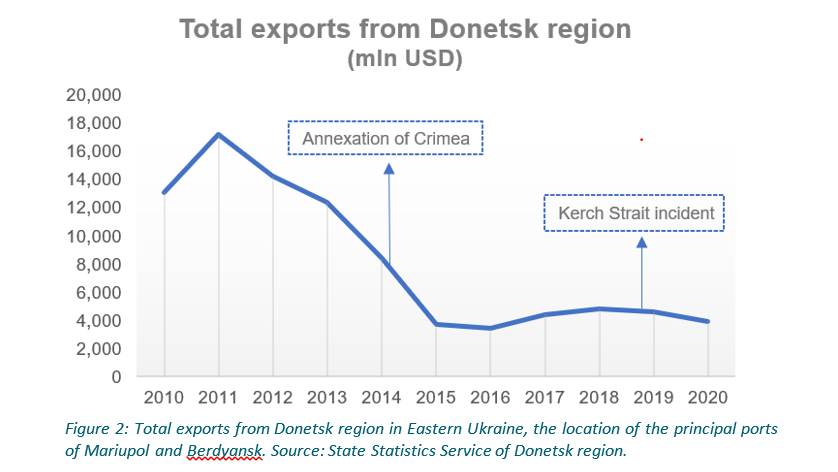 In 2016, Ukraine brought a case against Russia at the International Court of Arbitration (ICC) to claim its rights to coastal waters in the Black Sea, Sea of Azov and the Kerch Strait. The case aims to provide Kyiv legal rights to its offshore reserves and its ability to operate its cargo vessels without disruptions and shipping delays. The ICC is expected to decide in favour of Ukraine, but the Kremlin is highly likely to ignore any decision and continue exercising its de facto control over the disputed maritime areas, including by harassing vessels in Crimean coastal waters.

Since the 2018 completion of the Kerch Strait Bridge, Russia has systematically enforced a strategy of access denial that limits the freedom of navigation of cargo vessels heading to Ukraine's major ports of Mariupol and Berdyansk. This exercise of de facto sovereignty over the Sea of Azov is used as leverage to achieve wider foreign policy objectives vis-à-vis Ukraine and the West, and reflects the risks of escalation in the Black Sea.

Notably, the Kerch Strait incident in November 2018, where Russia used a cargo ship to physically blockade the bridge – the only example to date of Russian and Ukrainian forces directly fighting one another – shows the greater vulnerability of the maritime sphere to armed confrontation and escalation compared to on land, where escalation thresholds are much lower and the risk of war correspondingly greater.

The construction of the Kerch Strait Bridge in 2018 not only connected mainland Russia with Crimea, but granted Russia undisputed control over the entrance to the Sea of Azov. The 2018 Kerch Strait incident therefore illustrated Russia's ability to block all maritime traffic through the strait at will and thus enforce its de facto sovereignty over the waterway.

Since the opening of the Kerch Strait Bridge, the Sea of Azov has been under de facto blockade by Russian forces, severely limiting trade volumes and harassing ships bound for the Ukrainian ports of Mariupol and Berdyansk. However, since the deployment of two modern Ukrainian Gyurza-M-class gunboats to the Sea of Azov in September 2018, open sea detentions of commercial vessels by Russian constabulary forces have dramatically decreased in the region.

The graph below reflects how the deployment of modern naval assets can help to deter aggressive actions in the region; in this case, reducing the risk of open sea detentions for shipping companies, including those operating under EU flags of convenience. Nevertheless, the Ukrainian deployment forced Russian forces to limit the interdiction of shipping to around the Kerch Strait itself, resulting in a spike in delays to shipping transit.

Periods of geopolitical tension with Ukraine and the West often translate directly to longer inspections and delays for non-Russian vessels. Prior to the opening of the Kerch Strait Bridge, the average waiting time for vessels passing through was five hours. This rose to 37.4 hours in 2019 and 29.6 hours in 2020. The most recent data from Black Sea News indicates that vessels faced an average delay of 39.7 hours in September 2021, indicating such disruption remains an enduring risk for shipping companies today amid heightened regional tensions. 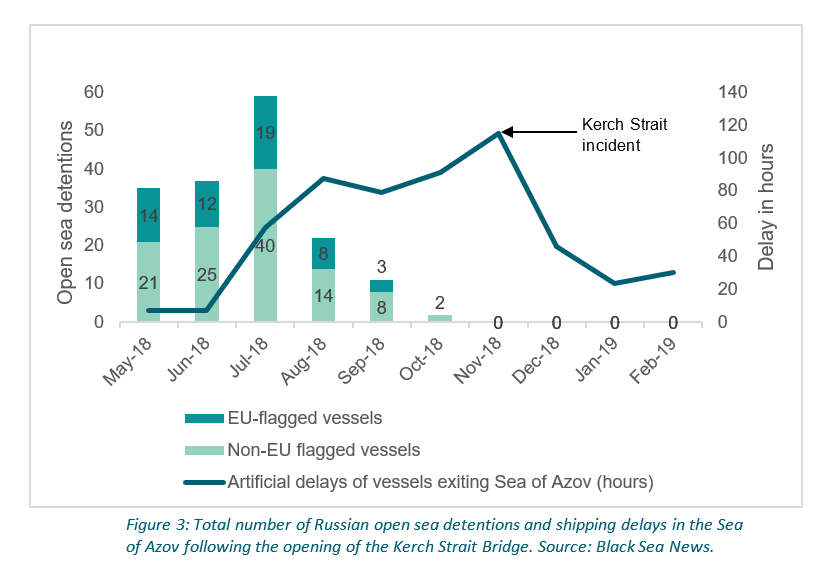 One of the key flashpoints in 2022 and beyond will be NATO's increased engagement in the Black Sea Region, particularly growing military cooperation with Ukraine. After the success of the deployment of its gunboats in the Sea of Azov, Ukraine has been attempting to rebuild and modernise its navy in line with NATO standards, paving the way for eventual membership and aiming to establish a credible deterrence against Russia at sea....