The United Nations Intergovernmental Panel on Climate Change (IPCC) published the first part of its Sixth Assessment Report (Working Group I: The Physical Science Basis) on 9 August 2021. Hereinafter referred to as the IPCC report, the document forecasts a general increase in severe weather events in the coming half-century across most regions worldwide. Whilst the majority of the report aims to establish the causal link between human activity and climate change (specifically global warming), the report also sets out the long-term implications of climate change for human habitability on Earth, and identifies five key scenarios assessing the extent of climate change between 2021-2100. These scenarios set out the likely level of global warming based on, in order: successful mitigation of greenhouse gas (GHG) emissions worldwide, moderately successful mitigation, a continuation in current trends, a moderate increase on current levels, and a severe increase, as outlined in the table below.

This report aims to follow the 'intermediate', 'high' and 'very high' scenarios for global warming set out in the IPCC 2021 report, on the basis that current international policy frameworks for GHG mitigation remain underdeveloped. As such, this report aims to identify the implications for key business sectors likely to arise from the conservative estimates of the 'intermediate', 'high' and 'very high' scenarios, with additional analysis of the implications for national governance and international security over the coming decade were likely to impact business operations.

Of the three scenarios identified by the IPCC, the 'high likelihood' scenario identified in the IPCC report is that Earth will see an increase of 1.5C or 2C by the mid-2030s, following current international trends in climate policy and emissions levels. The frequency and intensity of severe weather events will vary depending on the level of global warming reached (whether +1C, +1.5C, +2C or +4C), but the IPCC report deems an increase of 2C within the next twenty years as 'very likely'. A 2C increase will result in an exponential increase in extreme weather events worldwide, posing physical risk to assets and life, and placing indirect strains on border integrity and socio-economic health due to heightened levels of climate-induced migration. 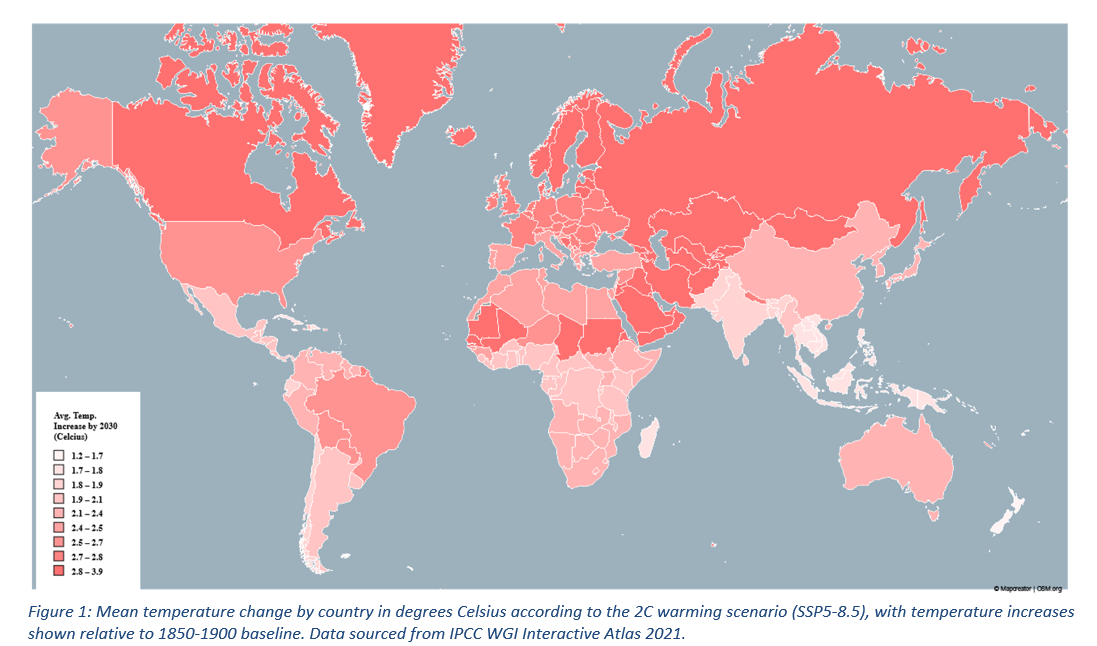 At present, limiting global warming to a worldwide increase of 1.5C would represent achieving a 'cap' on the current level of global greenhouse gas emissions (GHGs), and would require more stringent limitations on GHGs worldwide. Successfully implementing GHG mitigation policies to avoid a 2C increase would ensure the most severe physical impacts projected by the IPCC report are, to some degree, localised in their impact.

However, the IPCC report deems successful mitigation to be 'low likelihood' due to the complexities in securing international adherence to strict carbon reduction policies. The IPCC report finds that an increase of 2C is extremely likely to be reached within the next century, whether by 2034 (in the case of global emissions remaining, currently, at the highest level) or by 2072 (in the case of improved mitigation of global greenhouse gas emissions).

This Sibylline Special Report aims to identify high-level, broad risks businesses are likely to face when operating in Europe, Eurasia, Middle East/North Africa (MENA), sub-Saharan Africa (SSA), Asia-Pacific and North and Latin America over the coming decade, taking the 1.5C and 2C global warming scenarios outlined by the IPCC. Although the implementation of successful carbon reduction policies is a politicised subject, this report aims to assess potential risks on the basis that such policies will remain limited in scope or efficacy, and thereby to present actionable information for a hypothetical 'worst case' scenario.

The IPCC report's authors note with high confidence that extreme heat events will become exponentially more severe and occur with greater frequency over the next century in both Europe and Eurasia. At a global temperature increase of 2C – currently likely to be achieved by the mid-2030s – Western and Central Europe

and the Mediterranean will see a notable increase in extreme weather events including wildfires, heatwaves and extreme rainfall causing flooding.

As such, throughout summer 2021, the wildfires affecting Greece, Spain and the Mediterranean region, and the extreme flooding in western Germany, Belgium, Luxembourg and the Netherlands may prefigure a trend in future extreme weather events in Europe, although the IPCC has noted this correlation has only been confirmed with 'low confidence'. Both the wildfires and flooding in Western Europe caused substantial disruption to regional travel and regional supply chains, and destroyed residential and business infrastructure as well as resulting in over 240 deaths. Meanwhile, emergency services were limited in their ability to react due to damaged or flooded roads.

In Eurasia, the most prominent extreme weather event in 2021 were the Siberian wildfires, which were the largest in history and responsible for the destruction of over 40 million acres (as of August 2021). Elsewhere, severe droughts and record heatwaves across Central Asia are likely to pose a serious challenge to local operations due to food and water shortages, currently forecast to stretch into 2022. The Toktogul Reservoir in Kyrgyzstan reached record low levels before summer 2021, and remains well below capacity, imperilling regional water and energy security due to its role in supplying Kyrgyzstan’s largest hydropower plant.

Furthermore, the ongoing heatwaves in Central Asia are likely to incur large-scale crop failures in agricultural hubs across the region, such as in Kyrgyzstan’s Chui province, where local farmers anticipate a total loss of crops. A large-scale crop failure, compounded by a decrease in potable water, is likely to seriously imperil socio-economic health regionwide and drive domestic unrest from agricultural workers, as well as drive risk of resource-driven inter-state tensions. Ultimately, this will drive a physical security risk to operations in the region alongside heightened food and water security issues.

In the short to mid term, growing concerns over global warming and climate change will continue to drive consumer pressure on firms to adopt green and eco-friendly policies in the UK and Europe. Similar pressure is likely to drive green policy adoption at the political level, with national elections likely to result in growing support for green political parties among electorates. For example, the recent federal election in Germany in September 2021 saw a historic result for the German Green Party, which is now likely to form part of the next coalition government as post-election negotiations continue. 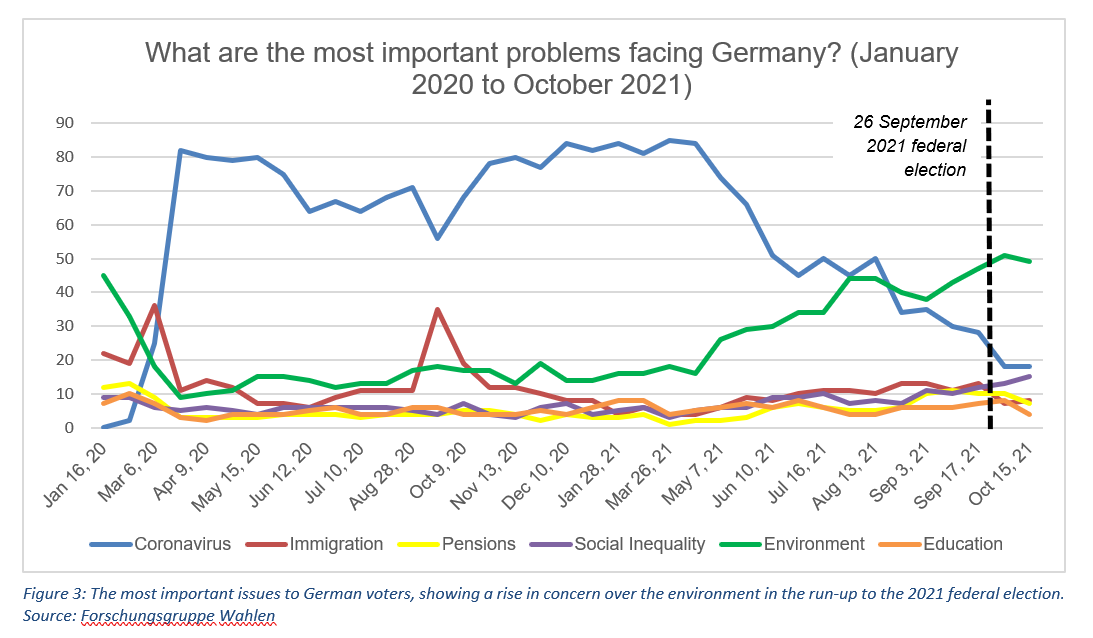 Given the growing importance the European electorate is placing on the environment, a shift in European governance standards toward climate-friendly policies is very likely to become more apparent in 2022 and beyond. Green and eco-friendly policies implemented at the national level in Europe are likely to impact high-emission sectors disproportionately, forcing those sectors to adapt or face substantial policy risk; manufacturing, shipping, aviation, agriculture and defence sectors are particularly likely to face sustained pressure to comply with new governance standards. Across Europe, soaring energy prices are likely to compound growing pressure from EU institutions to regulate large multinationals operating across the region to ensure compliance with the EU’s green ambitions. As such, firms operating in Europe are likely to face at least moderate policy risk in the next 6-12 months as European agencies seek to tighten sectoral regulations.

In Eurasia, efforts to transition to clean energy remain more sporadic, and legislative efforts to introduce more eco-friendly policies at the national level continue to face stiff resistance from domestic stakeholders and vested interest groups. Meanwhile, rising food prices across the region have already forced national governments to introduce regulations attempting to maintain food security this year. As noted by Russian national statistics agency Rosstat, food prices across Russia rose by 8.2% between January 2020–March 2021, with some staple foods rising by as much as 40%. Large-scale crop failures and food insecurity in Central Asia could also become more common in the longer term, driving up the cost of basic food items as water resources become even more scarce. Heat waves and fire weather would only compound this issue, further driving food security instability and water shortages....