As tensions between Russia and Ukraine increase over the potential of a Russian invasion, far-right groups are spreading pro-Russia and anti-Western propaganda. This is most apparent in the US, but is also evident in other NATO countries, like Germany and the UK too. The anti-government rhetoric portrays the increasing tensions as the fault of Western governments with an ulterior motive to boost the profits of the elite, often linked to the Jewish community. 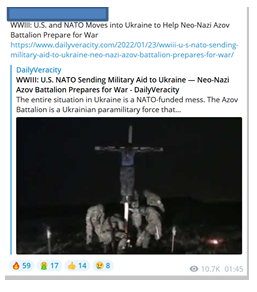 Over the past few months there has been a notable increase in Russian misinformation and propaganda throughout Europe. On 20 January the US imposed sancitons on four Ukranian officials believed to be working with Russia's intelligence service to spread disinformation and  destabilise Ukraine. Among other narratives, Russians have recently portrayed Ukranians, aligned with the West and Nazism, as committing genocide against ethnic Russians.

Sibylline in-depth analysis of far-right Telegram channels identified this exact narrative, alongside more explicitly anti-US government and anti-Semitic narratives. The most prominent of these portray the US government as provoking Russia in a bid to start another war which would benefit elites, and especially Jewish elites. Some even claimed, as did a caption for one of the far-right conspiracist Alex Jones' videos, that the West was starting this war with Russia to "cover the collapse of the Covid narrative". This video has been watched 23.1k times at the time of writing.

Far-right groups often use global events to advance anti-Semitic narratives, as previous Sibylline reporting has identified in relation to both the conflict between Palestine and Israel, as well as the Covid-19 pandemic. Far-right groups also use these events to propagate anti-government rhetoric, as evidenced during the US withdrawal of Afghanistan by the significant amount of anti-US posts on Telegram channels. As such, the link between rising tensions over Ukraine and anti-government and anti-Semitic rhetoric is expected. Despite this, just one week after hostages were taken in an attack on a Synagogue in Texas (see Sibylline Situation Update Brief 18 January 2022), propagating anti-Semitic and anti-government hate does sustain the elevated threat from far-right groups in the US.

Within far-right groups, the rising tensions between Russia and the West, specifically NATO and the US, is being framed as one in which the West is the aggressor. Furthermore, this aggression is being portrayed as beneficial to elites, such as those within the financial and defence industries, who exert control over governments. As a result, this is the latest manifestation of anti-government rhetoric amongst far-right groups within the US, sustaining the threat of violence from militia groups and individuals inspired by such groups. Moreover, by linking elites and the Jewish community these narratives exacerbate the threat of anti-Semitic hate in the coming weeks too.

The threat of attacks is currently 5 in the US, indicating that whilst an attack is likely not imminent, religious and politically motivated attacks do occur with regular frequency. Both anti-Semitic hate and anti-government rhetoric espoused in far-right communities in regards to Russia and Ukraine maintain this current level. However, if Russia invades Ukraine and the West responds with force, this will increase the threat of domestic attacks. The most likely targets are government personnel and infrastructure, businesses in the financial and defence industries seen to be benefiting from the war, and members of the Jewish community. Given that some companies, such as Lockheed Martin and Raytheon, have already been named by several groups as benefiting, these companies are the most likely to be targeted.