Escalating military tensions between Russia and Ukraine have prompted a strong diplomatic and political response from EU member states and the US, including the threat of strong economic countermeasures and an enhanced sanctions regime targeting Russian financial assets.

Notably, the US Senate Committee on Foreign Relations expects to publish severe sanctions packages by mid-February, while UK Foreign Secretary Liz Truss announced plans to introduce additional sanction-related legislation in the House of Commons on 10 February. This comes as Biden administration officials hold talks with EU representatives to draft a collaborative sanctions approach, which will significantly impact Russian business operations and likely result in an economic response from the Kremlin.

Increased tensions have highlighted Europe's reliance on Russian energy imports, which constitute close to 40 percent of piped gas to Europe. Some EU nations are even more dependent, with Austria, Finland, Lithuania and Slovakia obtaining over 80 percent of their natural gas from this source. With Russia having previously used energy supply as a weapon of 'soft' power, particularly during the 2014 invasion of Crimea, a serious escalation in hostilities with Ukraine is likely to trigger a similar response.

The worst-case scenario in the current situation, whereby Russia invades Ukraine and triggers substantial EU sanctions, might, in turn, prompt Russia to close all or most of its gas pipelines into Europe. Russia has used European reliance on its gas pipelines previously, namely during the cuts of 2006 and 2009, and it is somewhat likely that Russia would use the threat of gas cuts to Europe to sow division and delay a unified European response in the event of an invasion.

Were Russia to invade Ukraine and subsequently cut gas supplies to Europe, substantial disruption to European energy security in the short term would be likely, particularly for EU countries with high gas consumption and reliance on Russian imports. Germany, Italy, Slovakia and Austria would likely see the most severe effects, all of whom source over 80 percent of their gas imports from Russia. By comparison, the UK would experience less disruption with an estimated 32 percent of its total energy consumption coming from gas, 15 percent of which is sourced from Russia, similar to Sweden and Spain.

Moreover, whilst an evaluation by Energy Intelligence indicates that a complete freeze on piped gas to Europe would cost Russian energy giant Gazprom between USD 203-230 million per day in lost revenues, amounting to a potential USD 20 billion in losses after three months, Russia's central bank reserve of approximately USD 600 billion could encourage the Kremlin to absorb such losses in the short term. Additionally, short-term losses may be further mitigated by Gazprom's increasing gross profits as a result of the rising cost of gas and oil. JPMorgan Chase has forecast that it could make over USD 90 billion gross operating profit this year, compared to USD 20 billion pre-pandemic, further minimising the impact of a European gas freeze. As such, a total freeze on gas supplies to Europe is a realistic option for the Kremlin, at least in the short term.

However, there are some indicators that any mid- to long-term disruption to Europe might be mitigated by energy diversification initiatives. Post-2009 efforts by EU institutions to improve resilience and decrease reliance upon Russian gas have yielded some results, with vastly improved gas interconnection between EU countries and permission granted countries to source their gas from non-Russian origins. Of particular note is the boom in regasification plants built across Europe, which a study by Citigroup suggests could enabling it to sustain a downfall in up to 66 percent of Russian piped gas in the short term (two to three months) if regasification plants are operated at higher than the historic rate of 50 percent capacity.... 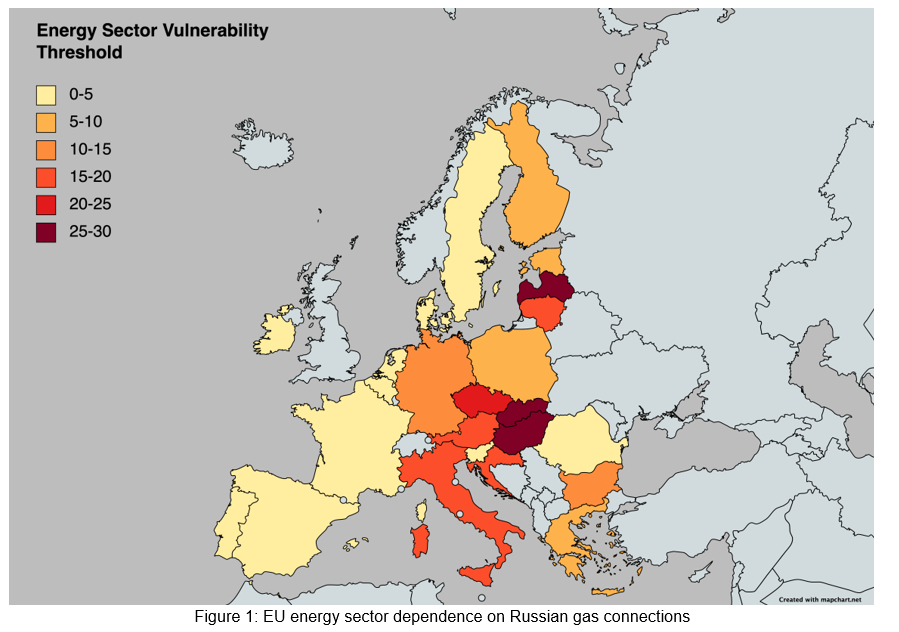