Since Covid-19 was first detected in December 2019, China has committed itself to an uncompromising approach to virus containment and elimination, relying on strict lockdowns, mass testing, and highly restrictive travel arrangements. Its international border, for example, has remained largely closed to foreigners since early 2020. This strategy helped to contain the spread of the virus, but it consequently created a variety of issues, including a drastic reduction of international travel and disruptions to global supply chains. As most countries across the globe have begun to emerge from nearly two years of restrictive measures, China's zero-Covid policy appears to be at an inflection point: increasingly unpopular among the population, but deemed a political necessity in curbing infections and preserving the ruling communist party's (CCP) official narratives on the pandemic (see Sibylline Situation Update Brief – 27 January 2022). Such doubts are further exacerbated by Beijing's renewed efforts to achieve post-pandemic economic stability. While the zero-Covid strategy's sustainability is questionable, it is unlikely to change in the near term. Nonetheless, minor recalibrations to its strategy, such as closed-loop operations, are expected at least until the 20th CCP National Congress, scheduled for this autumn, at which Xi Jinping is expected to be re-elected for a third term, in contravention of the party's established norms. Minimising risks of socio-economic instability and uncertainties will bolster the CCP's legitimacy and Xi's justification to remain in power.

Most troublingly from the Chinese government's point of view, the frequent shutdowns of the last two years have undermined the economy's growth prospects. As evidence of the official recognition of a slowing economy, Beijing set its 2022 annual GDP growth target at 5.5 percent, the lowest in three decades. Understandably, China's leadership is keen to avoid the reintroduction of widespread and prolonged Covid restrictions, as they would cause additional damage to the country's socio-economic health. 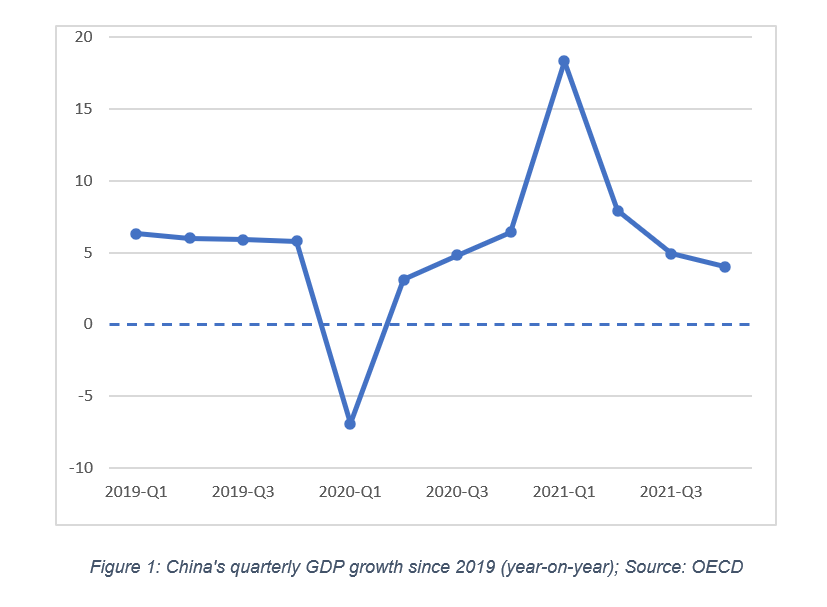 While GDP growth did accelerate mid-way through 2020, the overall rate of China's economic expansion has fallen sharply since June 2021 (see Figure 1), amid further waves of the coronavirus and associated tough restrictions. This has had negative implications for the global economy given China's importance to global manufacturing. Recent lockdowns in Shenzhen, China's tech hub, and Shanghai, China's financial capital, have generated renewed concerns among international businesses.

Recent sightings of ships waiting to dock in both Shenzhen, which has since gradually lifted the lockdown since 18 March, and Qingdao underline the impact of China's Covid-19 policy on the free flow of international commerce. About a third of the world's manufacturing capacity is estimated to be located in China, so any threat of mass lockdowns – just as the world seeks to emerge from two years of heavy economic restrictions – is a bitter blow to many other economies as well.

In recent weeks, China has been experiencing its most severe Covid-19 outbreak since the outset of the pandemic. As a result, President Xi's recently expressed intent to avoid as much economic damage as possible while simultaneously maintaining a steady, but dynamic, zero-Covid policy. The country's most affected regions by the current wave account for almost 17 percent of the national GDP. Even a single month-long lockdown of 30 percent of China's manufacturing capacity would reduce the country's GDP by approximately 1 percent. Moreover, the attainment of China's annual growth target of 5.5 percent target will require sequential quarter-on-quarter GDP growth at a higher seasonally-adjusted annual rate (SAAR) of 6.5 percent. Hence, localised and 'targeted' lockdowns, together with closed-loop business/factory operations, are likely an attempt to compromise between maintaining economic activity while curbing infections. The Chinese government will be hoping that adopting a closed-loop system for key commercial activities, successfully implemented for the Beijing Winter Olympics, will soften the lockdown's impact on the economy.

However, making tweaks to Covid-19 responses while the highly transmissible Omicron variant spreads across the country is attached with significant policy risks and challenges to government stability, at least at local levels. Under its top-down governance structure, the CCP leaders at all levels are mostly accountable to their superiors. The CCP leadership has a tendency of dismissing local officials for policy failures. Many mayors, governors, and party chiefs in the worst affected areas have been replaced during the pandemic. Indeed, authorities have stepped up censorship on social media content about failures or controversies stemming from local governments' responses to the current outbreak.

At a recent meeting of the CCP Politburo, Xi said that China must "strive to achieve the maximum prevention and control at the least cost, and minimise the impact of the epidemic on economic and social development". This, however, rests on striking a fine balance between providing adequate medical services and economic necessities. To this end, officials will face added pressure to impose 'snap' but shorter lockdowns in infection hotspots. Lockdowns have become increasingly unpopular to a population that has essentially been restricted to its own country for more than two years.

In addition to targeted lockdowns, boosting China's medical defence against Covid-19 will also be critical part of the country's exit plans. Chinese-made inactivated Covid-19 vaccines are believed to be less effective and have a shorter immunity span than leading mRNA jabs developed in the West. While Chinese firms have secured distribution contracts on several foreign vaccines, including the Pfizer-BioNTech shot, the government has yet to approve any Western vaccines. Instead, Beijing is pushing for the indigenous development of an effective mRNA jab, underscoring its geopolitical considerations as well as national pride. However, the recently secured emergency use approval for Pfizer's antiviral medicine Paxlovid suggests that Beijing practices more flexibility when it comes to Covid-19 treatments. That said, progress in domestic vaccine and treatment developments will likely be gradual, as will the concerted push to improve the patchy vaccination rate of China's elderly population. Citing the high death rate in Hong Kong's recent infection wave, Chinese health officials and experts have renewed their calls for senior citizens to get inoculated and boosted amid the ongoing outbreak...