As a data-driven firm, Sibylline has created an interactive dashboard containing data from Mexico's National Public Security System’s Executive Secretariat on all crimes reported between 2015 and Q1 2022. he Dashboard offers the client the possibility to further analyse and present current security trends with municipal detail. 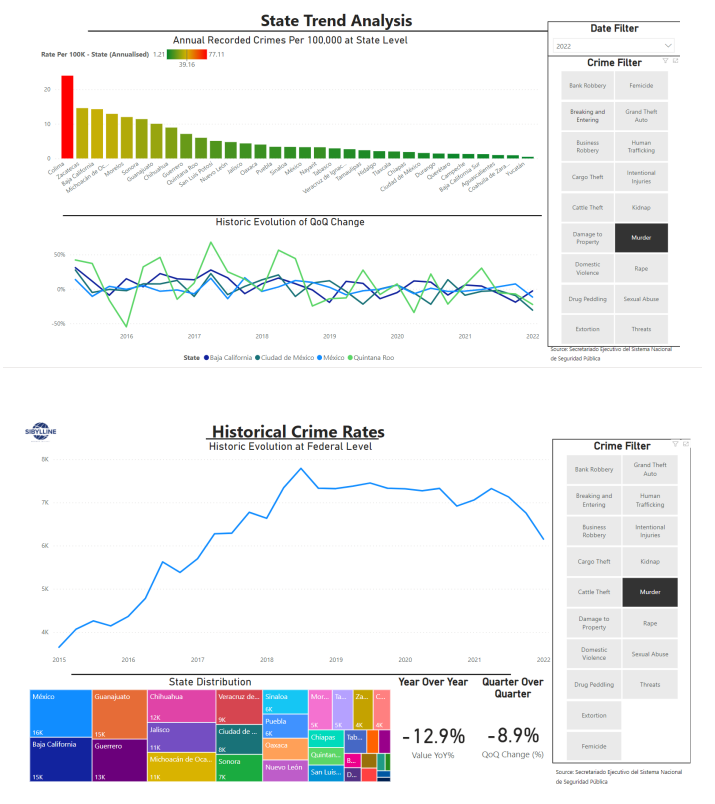 According to Mexico’s national statistics institute (INEGI), the national homicide rate fell to 8.9 percent in Q1 2022 compared with Q4 2021.The first quarter of 2022 was Mexico's least violent first quarter since 2017, with homicides falling 12.9 percent relative to the same period last year. This equates to 6,152 homicides reported between January and March 2022, compared with 7,061 homicides reported between the same months in 2021. Six states continue to concentrate 50 percent of all homicides: Guanajuato, Michoacán, Estado de México, Baja California, Jalisco, and Sonora.

The states with the largest increase in homicides quarter-on-quarter (QoQ) Colima (29 percent increase), where violence has largely been driven by the renewed competition over the port of Manzanillo between the Cártel Jalisco Nuevo Generación (CJNG) and the Sinaloa drug trafficking organisation and their local allies. Colima is a strategic transhipment point for weapons, cocaine shipments, and illicit drug precursor chemicals. Clashes between criminal groups resulted in over 40 homicides in two weeks in March.

Puebla and Nuevo León states also saw significant increases in homicides Q1 2022, with a 21 percent and 20 percent QoQ rise respectively. The arrests of leaders of a branch of the CJNG produced a spike in violence in Puebla, whilst the arrest of leaders of the Cártel del Noreste has provoked violence in Nuevo León. Meanwhile, turf wars between local groups and the CJNG caused an increase in homicide rates in Q1 2022 in Michoacán (19 percent increase). These turf wars have been ongoing since 2020. Between January and March 2022, Michoacán reported 730 murders. Furthermore, homicide rates in Morelos state increased 12 percent. Morelos is a key transit route to smuggle drugs and other contraband from the Pacific coast into Mexico City. Violence increased last year as the CJNG and splinter groups of the Beltrán Leyva and La Familia Michoacana drug trafficking organisations engaged in a struggle for control of the territory.

renewable resource crimes and the trade of heroin, cocaine, marijuana and synthetic drugs. Mexico ranked fourth highest, with only Colombia ranking higher in the region.

Whilst Mexico's overall homicide rate has fallen slightly, reports of femicide and sexual abuse continue to rise. Between January and March 2022, 229 alleged femicides were registered in Mexico. Estado de México is the state with the most reported cases, with 39 femicides so far in 2022. It is followed by Nuevo León and Veracruz with 21 reported cases in each state. Meanwhile, sexual abuse rates have increased 8.9 percent year-on-year (YoY). Rape, harassment, and domestic abuse have all continued to increase in Q1 2022.

The increase in gender-based violence will likely be a catalyst for social unrest in the coming months. Between 22 and 25 April, hundreds of women demonstrated against gender violence across urban centres in Mexico, with large demonstrations in Mexico City and Monterrey, the capital of Nuevo León state. The protests were sparked by the discovery of a teenage girl inside a hotel water tank in Monterey on 21 April. Unlike previous women's rights demonstrations in recent years, the marches were largely peaceful with no looting or vandalism. Protests against the growing violence against women have been frequent across the country, with people criticising the authorities perceived mishandling of the cases, as well as President Andrés Manuel López Obrador’s constant downplaying of gender issues. These factors will continue to fuel anger among women’s rights groups. It is likely that gender-related protests will grow and intensify in the coming months as cases of femicides continue to increase, particularly in Mexico City and other major urban centres.

According to the data, 150 kidnaps were reported in Q1 2022, a YoY decrease of 6.8 percent. However, some states, including Jalisco, Michoacán, and Oaxaca reported increases in kidnapping cases. Michoacán, for example, reported a sharp 160 percent QoQ rise in kidnaps in Q1 2022, with a 44.4 percent YoY increase.

Human trafficking in Mexico significantly increased in Q1 2022, with a YoY increase of 53.6 percent and a 65.6 percent increase compared with Q4 2021. The Covid-19 pandemic has exacerbated human trafficking activity in Mexico, as it drove millions into poverty and increased the number of people vulnerable to exploitation. This has been compounded by the declining interest and attention given to the issue by the authorities, which has allowed people smuggling groups to reorganise and operate with less scrutiny from law enforcement. Women and young girls are frequently trafficked to be sexually exploited as well as forced to work in domestic services. Meanwhile, men and boys are most likely to be forced to work in the mining and construction sectors....